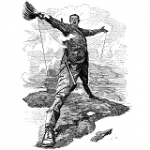 This was the mission statement issued as the project launched on January 7, 2011:

"This is an effort to explore the posibilities of using Wikia for establishing a geographical and political gazetteer over the Countries of the World from a historical perspective. This will include various geopolitical entities varying in size and importance from empires to sovereign states and dependencies, including subdivisions. It will be concerned with both formerly existing, as well as extant, political entities effectively establishing a timeline of geopolitical change

In addition to articles on the various political entities as such it may also cover related topics such as intergovernmental organizations, political institutions, individual statesmen, etc. Creating an independent gazetteer will enable the development of a coherent structure for geopolitical entities that might not be attainable within other more diverse projects." -- Domino theory, founder

Retrieved from "https://countries.fandom.com/wiki/User:Domino_theory?oldid=15195"
Community content is available under CC-BY-SA unless otherwise noted.